Seven Overpasses Over Internet 80 were raised . 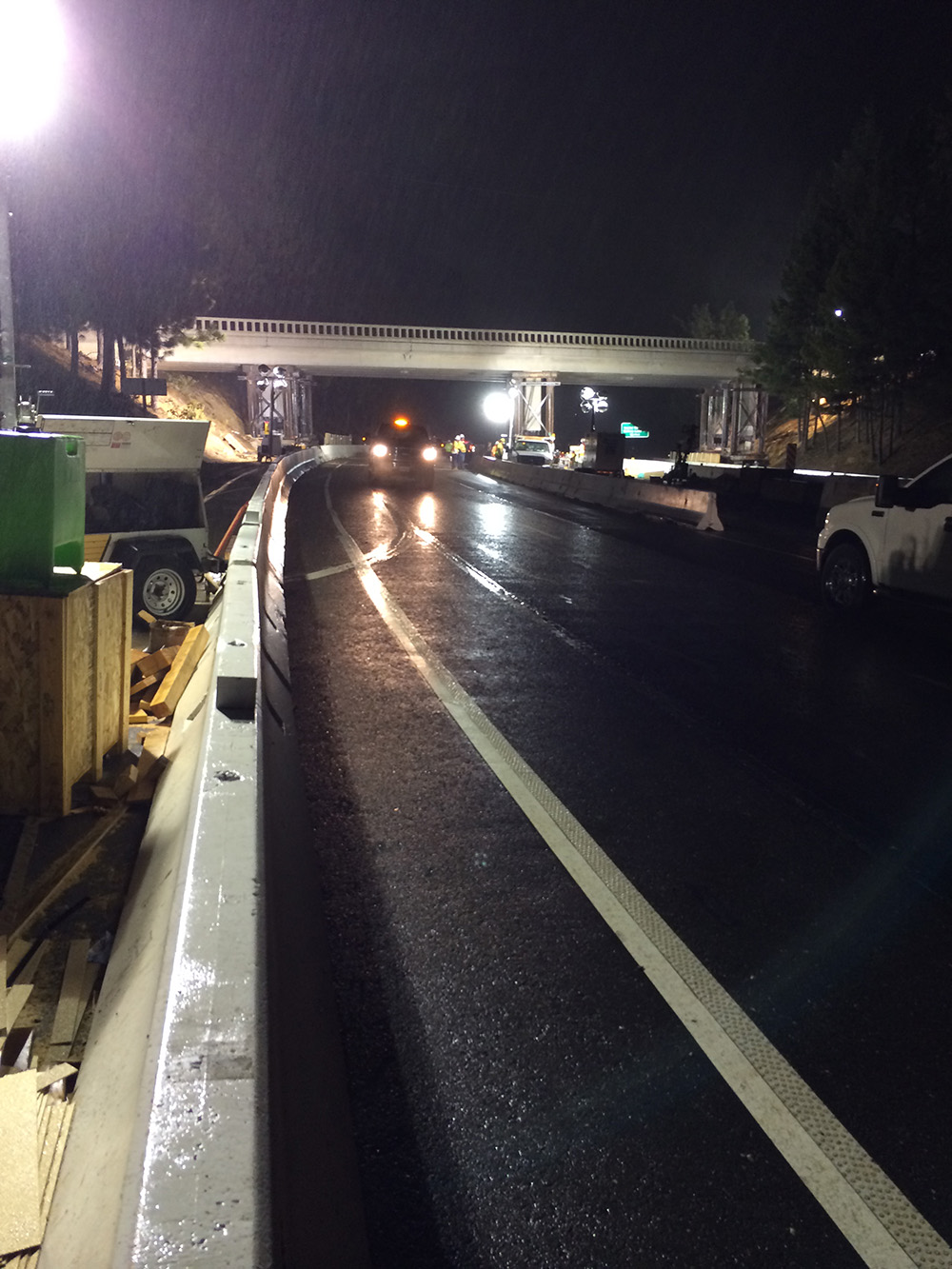 When we tell people about this job, that seven overpasses going over I-80 between Sacramento and Auburn needed to be raised up to 18 inches, they almost always ask have they sunk that much since they were built. No, they are rock solid, but there have been up to 3 time the highway was repaved with a 4” over lay now only having about 6” clearance for big rigs to pass under.

C. H. Bull Company had the opportunity to once again work with RGW Construction and design for them a hydraulic jacking system which would be used to lift the seven overpasses. The system had to be safe and also be able to quickly raise the various bridges because the freeway could not be shut down for more than 8 hours each night.

Getting ready for the lift 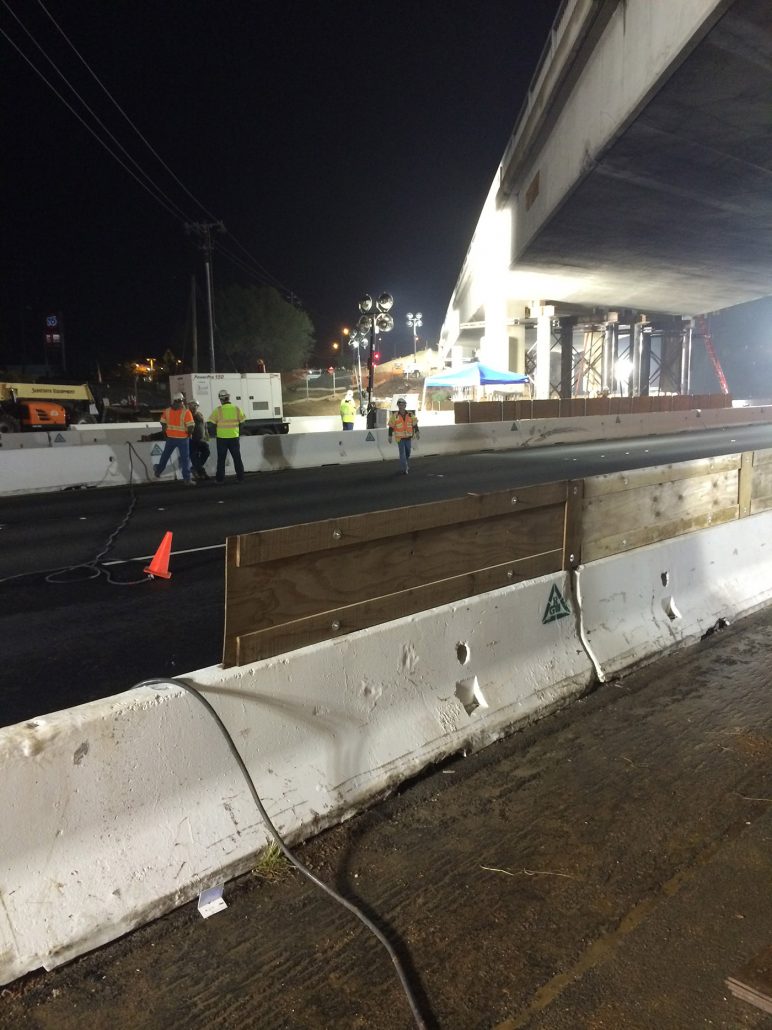 The concrete was cut and then jack hammered to expose the existing rebar. The jacks were in place to support the load of the bridge. With the tight window of just 8 hours to lift the bridge and get the east west traffic on I-80 moving again, we used the special manifolds developed for other jobs. The manifold has mounted to it a vacuum pump and tank so we could cut down the cycle time of the load return jacks.

A pump and special “vacuum” manifold controlling one set of jacks 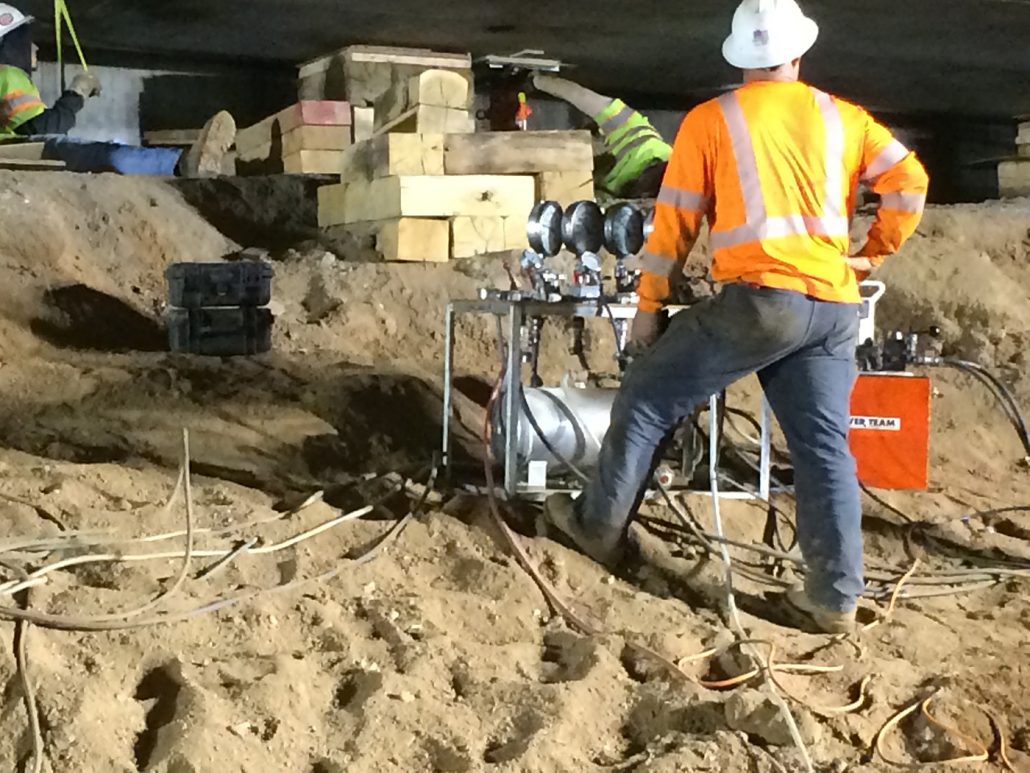 The command center for controlling the lift.
At the center of the picture the rebar has not been cut yet on the bent for the lift 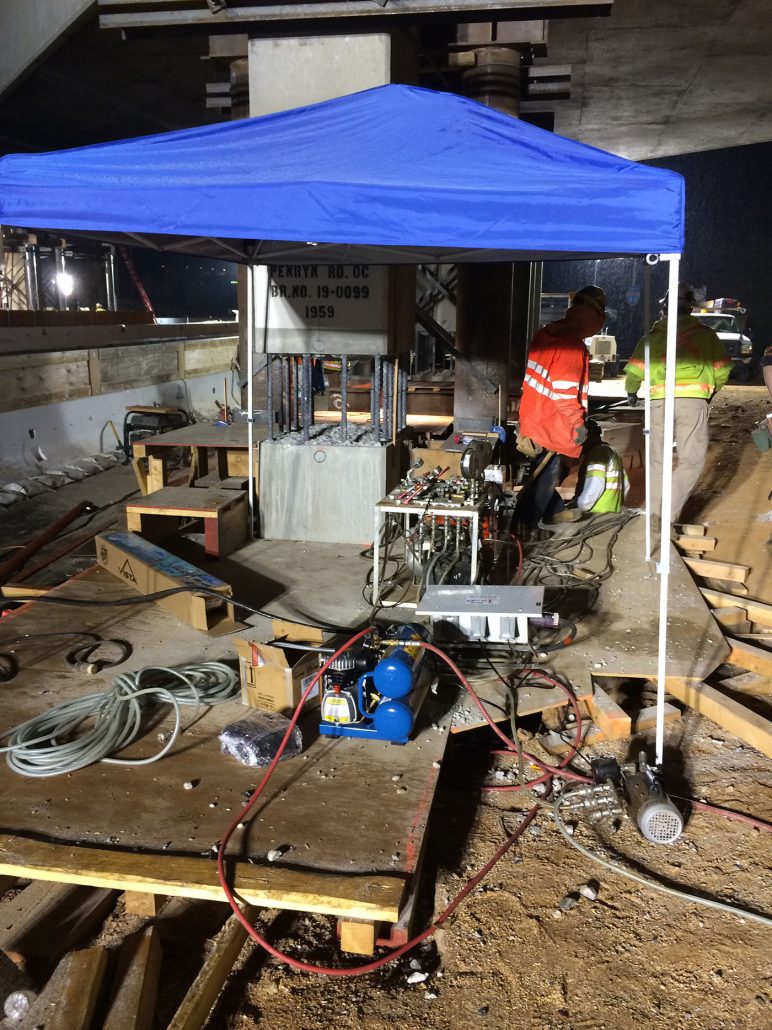 The rebar has been cut and the lift has started 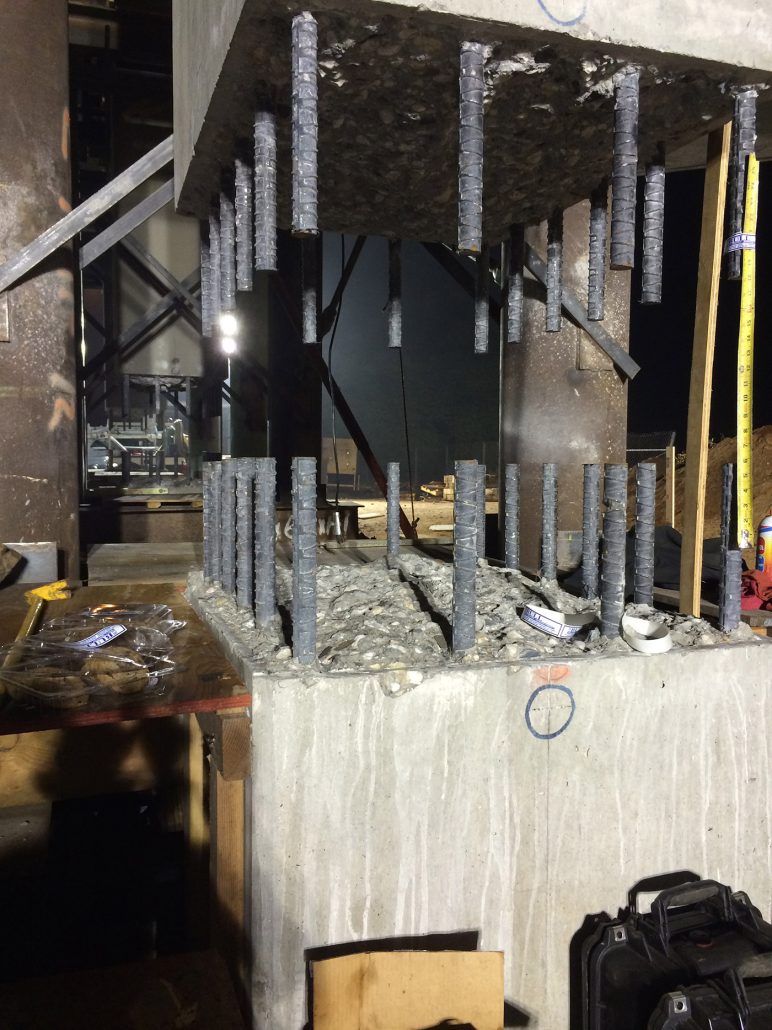 The system supplied to RGW was designed by Stan Sheppard, C. H. Bull’s high tonnage jacking specialist. We supplied to the contractor 32 calibrated jacks with a combined capacity of 4,000 tons (8,000,000 pounds), pumps, manifolds with calibrated gauges and hoses. 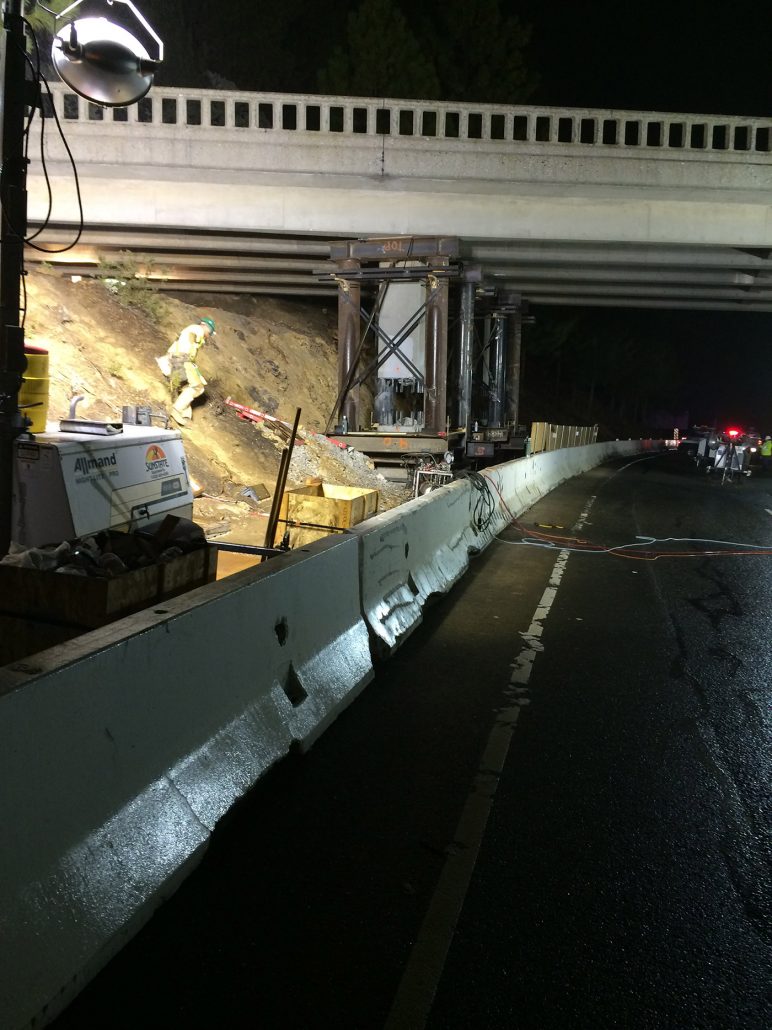 Guys gather and admire their job well done safely and
In a timely manner. 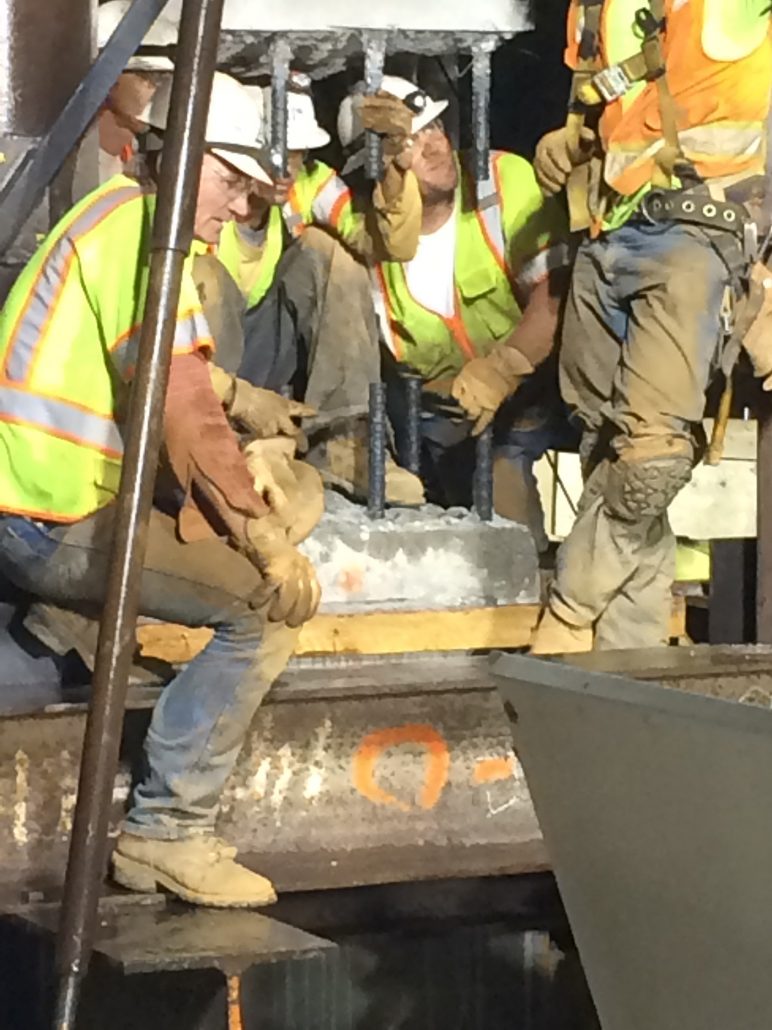 Gold Run Bridge Over I80
Scroll to top