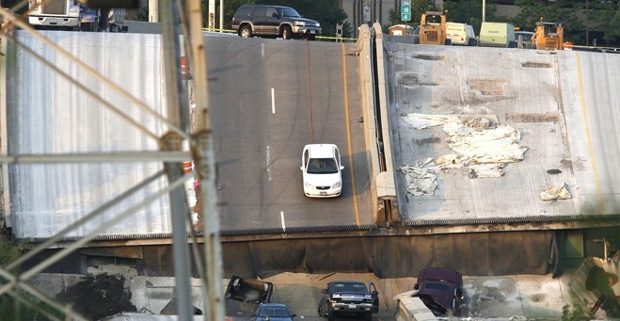 (18,000 bridges in need of repair are located in large U.S. metropolitan areas)

The Sherman Minton Bridge is sitting quietly empty over the Ohio River. The bridge spans from Louisville, Kentucky to New Albany, Indiana, and while it’s estimated that the bridge typically carries about 55,000 cars every day, it carries none today. The bridge has been closed, abruptly and unexpectedly, after cracks were found in two of its supporting steel beams back in early September. Disaster averted. At least there.

A new report from Transportation for America shows that there are more than 70,000 structurally deficient bridges in the United States, which the federal government define as needing substantial repair or outright replacement. More than 18,000 of these structurally deficient bridges are concentrated in large metropolitan areas, like Louisville, and account for three-quarters of all bridge crossings on any given day. That’s about 210 million cars crossing damaged bridges in the country’s biggest cities every day.

The scale is pretty massive. The report notes that in Los Angeles, where 386 bridges are structurally deficient, an average of 396 drivers cross a deficient bridge every second. That translates into more than 34 million crossings over damaged bridges a day in the L.A. metro area.

Pittsburgh, Pennsylvania ranks at the top of the list for cities with the most deficient bridges. More than 30 percent of the city’s bridges are rated as deficient, making up a total of 1133 bridges. The sheer number is high, partly because of the fact that the city and region are built around the convergence of rivers, but the percentage of bridges in disrepair is worrisome.

As the deadly 2007 collapse of the Interstate 35 W bridge in Minneapolis showed the country, there are extreme and costly dangers to not maintaining bridges’ structural integrity. But as the report notes, the cost of fixing all the bridges in need of maintenance is immense.

The Federal Highway Administration (FHWA) estimates that the backlog of potentially dangerous bridges would cost $70.9 billion to eliminate, while the federal outlay for bridges amounts to slightly more than $5 billion per year.

“The recent shutdown of the Sherman-Minton Bridge between Kentucky and Indiana was yet another reminder of the urgent need to repair our nation’s bridges,” said [James Corless, director of Transportation for America]. “A sincere initiative to fix these bridges would put thousands of people to work while ensuring that these critical links continue to carry people safely to work and that goods can make it to market, now and well into the future.”

Congress has repeatedly declared the condition and safety of America’s bridges to be of national significance. However, the current federal program falls short of the need, even as it allows states to shift funds from maintenance toward new construction, whether or not they can show progress toward rehabilitating deficient bridges.

While it’s likely that many of these “structurally deficient” bridges are good enough to get by for now, deferring maintenance and repairs is likely to exacerbate their structural problems. It’s also likely to increase the probability that more bridges will be forced to close, like the Sherman Minton, or, worse, that they may face devastating collapses like that seen in Minneapolis.

The fact that most of these bridges are located in metropolitan areas is both not surprising and concerning. As metro populations grow, the amount of bridge crossings will grow as well. And unless those growing populations are willing to politically support the concept of paying to maintain and repair this infrastructure, more delays, abrupt closures, and potentially even collapses, could be looming.

One in ten U.S. bridges in urgent need of repair: report
Scroll to top